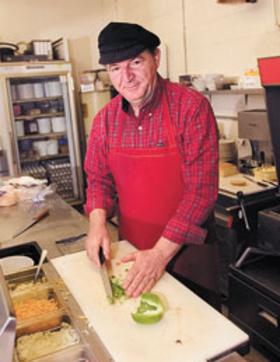 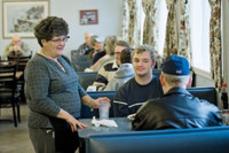 great finds. This is true for a Front Royal local who loves L’Dee’s Pancake House. He wrote, “I have tried their omelets, pancakes and waffles (both w/pecans) and have become a regular visitor. Since 1988 L’Dee’s has been a staple in the community and they treat their patrons like an extended family.”  http://blog.virginia.org/2013/07/22-great-breakfast-spots-in-virginia/

Larry Moutogiannis, owner of L'Dees Pancake House in Front Royal, chops green peppers in the kitchen of his restaurant.

"Virginia is for Lovers"

A favorite of tourists and locals alike, L’Dee’s Pancake House is decorated like an old-fashioned diner, with spinning counter chairs and vinyl booths. Many of the locals visit this restaurant almost every day, but instead of being wary of tourists, the restaurant welcomes them with open arms. In addition to a friendly environment, you’ll find reasonable prices and hearty breakfast options, like the Egg Platters and the Specialty Pancakes. Breakfast is served all day long, so if you have a hankering for waffles at dinner, L’Dees is the place to go. http://blog.virginia.org/2016/09/14-breakfast-spots-scenic-fall-destinations/

We’re creatures of habit and like to hold onto our

"At this Front Royal pancake house, everyone is family"

FRONT ROYAL -- When patrons walk through the front door of L'Dees Pancake House, whether they were looking for one or not, they're walking into a new family.

Sure, maybe they won't be eating Thanksgiving and Christmas dinners with them or attending reunions. And, it's highly unlikely they will rent a beach house, lake house or any other house for that matter for a summer vacation with them.

But in the L'Dees family, that's not the point. There, it's about seeing the same people virtually every day, at the same time, at the same place.

Moutogiannis said about 90 percent of his customers are regulars. Not only can he identify them by name, he knows what they will order, too.

Family, of course, should know these things about each other. Family is concerned when a member turns up missing. Such is the case in the L'Dees family.

"We've got regulars who come once, twice a day," Mrs. Moutogiannis said. "If they don't show up, we get worried. We'll call and check up on them. It's our extended family."

That has been the L'Dees' way of life since 1988, when Moutogiannis, who was born in Greece, came home one day and told his wife that he had found a restaurant he wanted to own. Though Mrs. Moutogiannis has been a lifelong Front Royal resident, she had never heard of L'Dees.

The couple, along with Moutogiannis' sister and brother-in-law, had helped run the Mount Vista Diner in town in the 1970s, so L'Dees was not going to be their first restaurant experience.

Since the couple took over L'Dees, they have had a streak that would make Baltimore Oriole Hall of Famer Cal Ripken blush.

Unlike baseball, however, the restaurant business is year-round. Save a vacation to visit Moutogiannis' family in Athens, Greece, every few years, the Moutogiannises, until recently, say they've never missed a day of work.

"The first time I was sick was on Christmas Day," Mrs. Moutogiannis said, "so I didn't have to work anyway."

Remember, though, the aforementioned "until recently." On Jan. 16, in what she deems was a "stupid accident," Mrs. Moutogiannis fell and broke her foot. She worked through the pain Jan. 17, but hasn't since and won't again for probably another few weeks.

Being away from her family is practically killing her. "I really miss seeing everybody," she said.

The feeling is mutual. She is Mrs. Do-Everything at the restaurant, from cleaning to cooking. Her husband and their two children, Katie, 26, and Sam, 23, have had to pick up the slack, along with Katie's boyfriend, Matt Bradley.

There are also waitresses Patty Ritenour and Marion Bell. Bell, nicknamed "Lulu," bears a striking resemblance to sassy waitress Carla from the classic television sitcom "Cheers," set in a fictional bar, where, like L'Dees, "everybody knows your name."

The staff roster at L'Dees, however, goes much deeper than that. Customers oftentimes do their own cleaning up and refilling of their coffee, Bradley said.

As it turns out, that is just one of the things that has made the L'Dees family so unique.

Before its numbers began dwindling due to deaths, a group of about a dozen men, who deemed themselves the Romeo Club, sat in the back corner of the restaurant to chat. Led by the late local legend Daffodil Bill, the group stood for Retired Old Men Eating Out.

When one of the Romeos had a birthday, Mrs. Moutogiannis would bake him a cake and everyone would sing. She remembered baking a sponge cake one time with an actual sponge. With icing making the cake look legit, the birthday boy struggled cutting pieces. Consider it a family prank.

"They just had the best time," Mrs. Moutogiannis said. "It's so sad that the table is empty now."

Despite some losses, the L'Dees family has remained strong with a solid core of regulars, such as one man, who, even in business attire, will don an apron -- made by another customer and hanging next to the Romeo Club's old table -- and clean tables awaiting his meal.

"People must think we're high class," Mrs. Moutogiannis said. "We've got a busboy in a suit and tie."

Just about every afternoon, toward the 2 o'clock closing time, Linden resident Frank Beckmann sits at the counter. He's typically the staff's newsman, coming in and giving them the day's events after watching TV at home.

An L'Dees family member for almost six years, Beckmann usually elects to go with the day's special. On Sundays, as Bradley noted with no hesitation, Beckmann gets a western omelet with an English muffin.

"What tickles me is the people who have been coming here for 20 years and they look at the menu," Beckmann said.

Bradley added: "And, they still order the same thing."

Beckmann, a retired U.S. Army colonel, said he likes coming in the afternoon because the restaurant is a little less crowded. On the weekends, he has trouble avoiding the crowd any time, as cars are often double parked throughout the day. Bradley said people even wait outside for a table.

In fact, on Sundays customers come in through the back door before the 7 a.m. opening, knowing the Moutogiannises have already been there for a few hours.

The couple arrives about 4 a.m. each day, except Tuesdays, when the restaurant is closed. For a man whose life revolves around his restaurant, Moutogiannis isn't a fan of his days off.

"I kid him all the time that he doesn't know what to do," Bradley said. "He's lost."

With an unorthodox schedule, the Moutogiannises say their social lives do get cut out. Of course, since work is their social life, they don't seem to mind.

And, after 16 years, the "r" word -- retirement -- has hardly scratched the surface of Moutogiannis' brain.

"I wouldn't trade this place for no restaurant," he said.

How could one even retire from family, anyway?

FRONT ROYAL -- Patty Ritenour gives her customers a little something extra for the holidays when she serves them at L Dees Pancake House.

Ritenour, 65, has been working as a waitress at the eatery at 522 E. Main St. in Front Royal for 13 years, and she's gained somewhat of a reputation for singing Christmas carols while she's serving customers.

"We have people come in and if they don't hear her singing, they've said, 'What's wrong with you today, Patty?,'" Mrs. Moutogiannis said. "So she'll start singing 'Frosty the Snowman.' She gets everybody in a happy holiday spirit."

Bowen was joined on Thursday at L Dees by Todd Martin, 19, a 2010 graduate of Skyline High School who attends Berea College and who also enjoyed Ritenour's singing.
"I'm studying music education, so hearing it as well makes me very happy," Martin said.
Ritenour said she enjoys seeing people smile when she sings.

"They get happy," she said. "They get excited."

Ritenour said she learned Christmas carols when she was a child.

"That's Christmas," she said. "That's what you're supposed to do. We sang at home when we were kids growing up. That was our Christmas Eve."

A mother of two with two grandchildren, Ritenour said she'll continue with her waitressing and singing as long as she's able. She said her favorite Christmas carol is "White Christmas."

"It brought the Christmas spirit alive for me," he said. "I mean, talk about the quintessential small-town USA. I mean, it's just great."

Lynette Buracker, 42, and her husband, Charlie Buracker, 48, who are regulars at L Dees, said they like having Ritenour for a waitress.

"It's not just her singing but like if it's the Redskins playing, she comes in in Redskins spirit and if they win, she's just yakking about it and everything," Mrs. Buracker said. "She's really fun, and you always know when she's in here because she talks to everybody."

Kristie Shutts and Jevona Starks, both 25 of Front Royal, said they and their young children also enjoyed Ritenour's singing.

"I think it's wonderful," she said. "Gets you in the spirit a little more, definitely."